Why Do We Wear Engagement & Wedding Rings?

Engagement or wedding rings are powerful and universal symbols. In serious relationships, the big question, “Will you marry me?”–is highly anticipated. Of course, next comes the surprise that is inside of that tiny box.

When the wedding day comes, other than kissing the bride, exchanging rings is one of the most traditional part of a wedding ceremony in many different cultures. So that takes us to another main question: “Why do we wear wedding and engagement rings?"

People have worn rings as an expression of their commitment for thousands of years. It is believed that 5000 years ago in ancient Egypt, women wore rings in order to express eternal love. It wasn’t until the 1800's that men started wearing rings as well.

The circle shape of a traditional ring represents a cycle without a beginning or an end, an abstract representation of eternity, something that lasts forever. The custom of wearing wedding and engagement rings on the fourth finger (also known as the “ring finger”) was first practiced by the Romans, who believed that finger was the beginning of the "vein of love", the vein that leads to the heart. 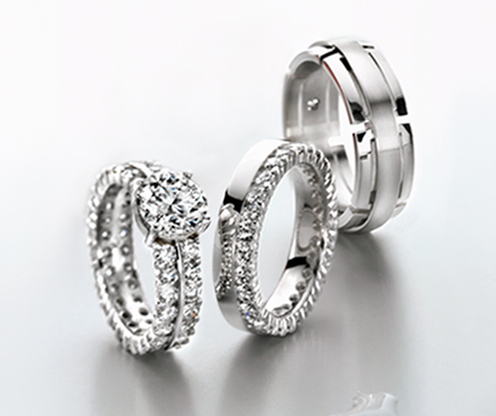 In Roman times, the betrothal had the binding power of a contract. The ritual was to give the bride a ring as a sign of public confirmation that the promise would be kept, this shows that rings once represented an agreement between two families.

In 1215, Pope Innocent III established a waiting period between the promise of marriage, and the actual marriage ceremony. An engagement ring was the promise of fidelity, symbolizing the couple’s devotion to one another. However, during the same period, engagement rings were also a reflex of social status, and only the wealthy were allowed to own or wear rings with jewels.

The engagement and wedding rings worn today, whether traditional, contemporary or antique-style is, more than ever, a reflection of a couple’s personal taste and style and their promise to each other.

At Furrer-Jacot, you can always find great reasons to give someone a ring or wear one as a couple by adding your personal touch into the design, choosing the material and the shape that fits the most your personality, besides writing a personal message as an engraving. There is a multitude of traditional and less traditional, more individual designs to choose from to mark the beginning of an never ending love.